yaamas
The older I have become and as my artwork matures the more my heart yearns to create. This yearning becomes a passion and my true emotions flow out of me as I paint. When you create, I believe you have to open yourself up and reach deep within to really get a feel for what you're all about and what you hope to say or express in your painting. Then everything you paint becomes real to you and for the viewer anything is possible. I paint for just that reason. It is a wonderful feeling to share my imagination and emotions with people through my paintings. As far as my personal life goes, My life with my muse, Nadine continues to be magical and there isn't a day that goes by when I don't think of the life I've been given and the gift I've been given to create. I thank the Lord for that. The road for me has just begun and there is still much to paint. I may need a faery or two to help me hold my brush when I am old and grey but in the meantime I will let the paint flow and the imagination soar. "I have a lifetime to paint, with a subject matter that is endless, with one goal in mind, and that is, to keep the child in all of us. " -J.B.

I had a little time the other day to bake a few new Baby Brownies while our little brownie, Noah was napping. I don't get a lot of time during the day to create but when I do I am grateful. All three of this little guys are available at the Brownieman Shoppe on Etsy. 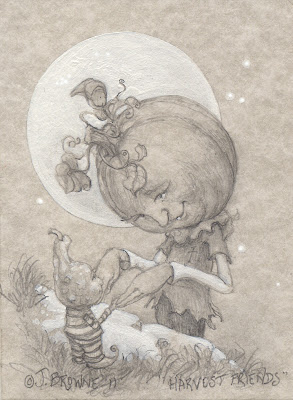 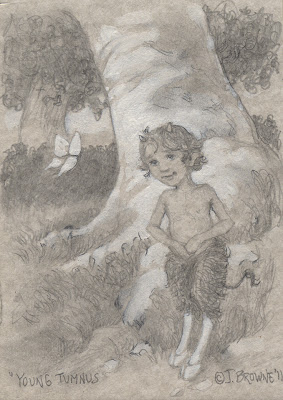 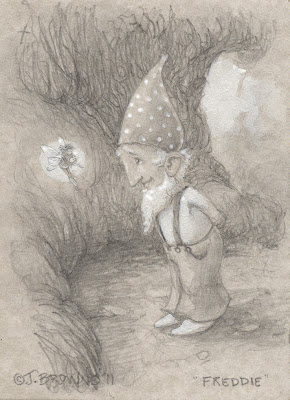 I hope you are all doing well on this fine day. I've been flying on inspiration's wings as of late and I am truly thankful to be able to do what I do. I just posted an original at my Brownieman Shoppe on Etsy that was inspired by this beautiful Autumn weather that we are having. It is called, "Autumn Fairy" and she can be found HERE if anyone is interested. Have a wonderful day! ~ James 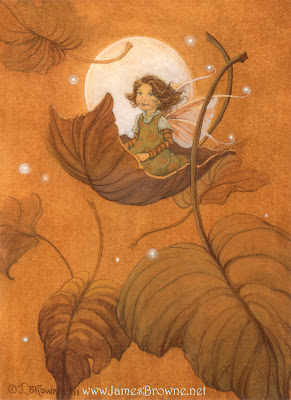 Some new works and some sales!!!

I hope that everyone had a wonderful Summer and that you are all doing well. I've been pretty busy working on two books and various commissions, but in the meantime, I thought I'd share a few new pictures I did in between jobs this past week. The first is a watercolor called, "New Wings". This little original is available on Etsy, if anyone is interested.

Another illustration I did was a pencil and gesso drawing It was inspired by our little son, Noah. It is called, "To The Lake".

...and onward they marched to the lake, two piggies to be cleansed, three
ducklings to find their gift and one little boy to fill his heart with Joy.

Lastly, I am having a SALE on my website, where you will find that ALL the HouseHold Fairy Figurines are on sale for only $10 each. These little weefolk are great for different spots around the house. They can be found HERE

With Inspiration, ~James
Posted by yaamas at 7:28 AM 1 comment:


Well, I'm still getting my feet wet when it comes to working with oil paints but I have to say I am thoroughly enjoying every moment I have with them. Here is one that I recently did of a loving Birch Couple. It measures 8x10 and the original is available at the Brownieman Shoppe on Etsy. I hope you like it. Have a wonderful day! 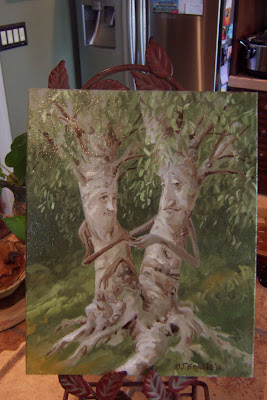 While I've still been in the process of working on two books and some commission work, I have found a little time to try something new and something different...something to help me loosen up a little bit and just have fun with and that something is oil painting. It is very different than painting with watercolor but I am finding a lot of joy in doing it. I thought I'd share a few paintings that I did in the past few days. Each one measures 5x7 inches and I've been painting them in one sitting of about 2 hours each. I've been posting them for sale at the Brownieman Shoppe on Etsy in case any of you are interested. I hope you like them! Top of the morning to ya! HAPPY ST. PATTY'S DAY, EVERYONE!!! 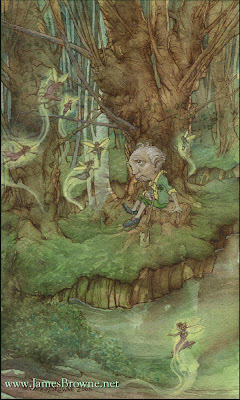 Deep in the center of an enchanted glen,...There lives Nody Eltrahy, a silly, old tale spinner.A strange little leprechaun, not of the folk of men,Sporting an easy smile, in his eyes the trace of a glimmer.For ages he served as Bard to the High King.Can't even imagine all the old soul has seen.Ageless memories are his story's source,Woven like a web without time's shortened course.He comes when he wants to his favorite placeUnder Old Burlybark, the willow, a dark and shady space,Beside the Babble Brook meandering through the magical wood,Its silvery water cool, sweet and surely good,To his sitting stump, all shiny and worn,The place where his tales seem to be born.The words of his weaving encircling his head,Bring to those who listen either smiles or dread.Smiles to some hearts, which his light tales please,Dread to others, their unbelief he'll tease.To his teaching and care come the young fairies and elves,Into their imagination he digs and he delvesTheir minds to expand, to see things wee and grand,To hear the forest's sounds as a musical band.Now look real close and listen, listen hard.The longer you do, the more you'll receive.Filling your own memories, you will relieveLife to come from the tales of this wise old Bard.But if with hardened heart and closed mind you hear,You'll miss on the smiles to carry you year to year.With unbelief and no vision you'll fail,And his words become just another Irish Tale.

The day that my life changed...

I've been wanting to share something that has been in my heart for some time now. It's something very personal to me. It is my testimony to how the loving Grace of God has changed my life. Those close to me already know my story of how I became a Christian but I felt in my heart that it was time for me to share it all with you. This is who I am... 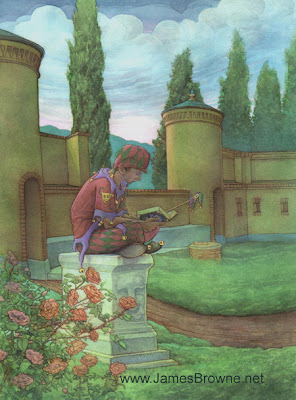 “COMIC RELIEF”
In a courtyard, on a pillar of stone,
sits a young jester, all alone.
All is kept out by walls all around;
Solitude unbroken, not a lonely sound.
Of the outside world all he sees,
mountains, cloud filled skies and tall green trees.
At his right is a thorny red rose;
its alluring smell permeates his foolish clothes.
On the cold stone he sits and reads,
the Book of Life with truth that frees.
The shadowless dial down by the wall,
reminds him, there is no time, answer the call.
The Book says, "Take the path that leads to the gate.
Get off that pedestal before it's too late.
Leave the walls that imprison your soul,
Flee before time and solitude take their toll."
His Gilded Book says, "run now to the gate,
run to the gate that few will take.
One gate to freedom, one gate to a cell,
through the one gate a desert, the other a well."
To the one gate, he sees a dirt path well trod,
to the other gate a path of untracked sod.
He asks his Book, "which gate do I take?
It's to the well and freedom my journey I'll make. "
"To the gate rarely used," his Book says to go.
The allure and the thorns of the rose hold him back;
to start he must cross the well trodden track.
A call he hears from the well beyond,
temptation aside, he decides to respond.
Off the stone and across the dirt, on the path unseen he flees,
to the far gate he runs, and beyond he sees,
A land celestial, with emerald trees,
In the center, a pool, with strange light did glow,
He paused at the gate, but his Book said, "go!"
So to the glowing pool he did run,
all around him was light, but there was no sun.
At the pool he kneeled, the water invited, he drank deeply,
his spirit now excited! As his eyes lifted, a Shining Man on a bench he did see.
And a voice of pure beauty said, " Come sit with me."
As their eyes met, tears of love and joy blended in the pool beneath,
the Shining Man said, "Oh fool of men, you've finally come to the place of Comic Relief.
I love my Father for saving a wretch like me. Praise Him!
Posted by yaamas at 11:51 AM 15 comments: